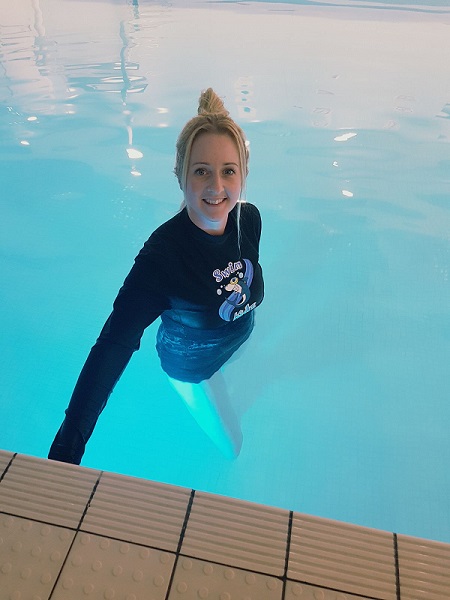 From a very young age, I could always be found outdoors. Every spare minute I would spend, riding horses, sailing or playing at a nearby adventure playground. The summer would be spent swimming in the local lido. Eventually, my passion for horse -riding took over, and after getting a horse of my own, I could be found at the stables, come rain or shine.

Family holidays were often spent on a small island called Kerkennah, in Tunisia. With the sea like bath water, we would arrive armed with an array of equipment, from snorkels and flippers to a blow up canoe, ready for our stay. The minute we arrived I would head straight to the sea, where I’d spend my entire time, having to be coaxed out each evening. This is the place where I really learnt to swim, and my love for it only grew from there.

At the age of 17, I went straight into an office job, despite always having that urge to pursue a career doing something active, or outdoors. After 10 years of commuting into London, and two children later, I felt unfulfilled and was constantly looking for something that was missing.

A friend and I began to research baby and toddler swimming, after the birth of her first baby and my second. I had found with my first child, that the demand for swimming was high, and the waiting lists long. We found that there was a lack of real fun, but also progressive lessons within our local area. This is when we came across Swimkidz. The lessons were fun, progressive and most importantly, really focused on the vital lifesaving elements at the same time.

My friend, and now colleague, then took the leap into the South East London area with a franchise of her own and I quickly followed, branching out into NW Kent and Sevenoaks.

Swimkidz offers something so much more and there is no better feeling than seeing the look on both child and parents faces when they are in full swing, enjoying one of our lessons. I now get to spend time with my family, whilst building the most rewarding career – And you can’t get much better than that!